Pachmari is a hill station in Madhya Pradesh, Central India. “Hill Station”, is a British term used to describe a town situated above the surrounding plain (in this case at 3600 fasl)  possessed of a cooler climate than the land below. It was for this reason that the British Army established a sanatorium at Pachmari in the mid 19th century.  By the time of the First World War, the sanatorium facility likely remained in use as a hospital, but now it was also home to the School of Musketry.

The natural landscape around Pachmari, is famous for its beauty, and is locally called “Satpura ki Rani”, which means “the Queen of the Satpura Hills.”  In these Satpura hills are soaring cliffs, waterfalls, open plateaus and dense jungles, each provide unique habitat for tigers, leopards, wolf, bison, wild boar and rhesus macaques.   Recognizing the ecological importance of the region, the United Nations Educational, Scientific and Cultural Organization (UNESCO) and the Indian Government established a biosphere reserve here in 1999.

If you have to go somewhere for weapons training, it seems this is the place: cool and pleasant, beautiful scenery, exotic wildlife, and far from the blast furnace that was the Persian Front in Mesopotamia.

As Will Grummett prepared to leave the Persian Front for respite in India, I wonder how he felt? What are the thoughts that go through the mind of a soldier departing the battlefield?  Is there simply relief being out of the fighting and harms way? I have read some accounts that admit to guilt on leaving, where friends and comrades are left to continue on.  I imagine  a confusing mix of emotions, amplified and distorted by physical and mental fatigue that comes from so much time in a watchful state.  I think Will could leave the front knowing that the fighting would not continue until the end of the hot season and that he wasn’t leaving anyone to bear his burden. His job was to make the best of his time in training and leave to become fit to return to the fight.  In May of 1918, how and when this war would end was still anyone’s guess.

Significant changes in the combatants over the 13 months between April of 1917 and May 1918 made the outcome of the war more, not less, uncertain.  The Russians, with Vladimir Lenin, Chairman of the Soviet Congress, at the helm of an emerging socialist state, negotiated a separate peace with the Germans in March of 1918.  Well before the treaty, the effectiveness of the Russian Army had dissolved as the state spiraled into collapse. Following the Tsar’s abdication in March of 1917, there were a series of provisional governments culminating in the near bloodless coup d’état that brought Lenin’s Bolsheviks to power in early November of 1917.

The departure of the Russian Army gave the Germans the chance to do what their original plan of attack deemed necessary for triumph; fight the war on a single front. But, had the Russians made them fight on the eastern front for long enough so that victory over the allies was now impossible?  And, while the end of fighting in the east meant that Germany could throw the weight of its army against the allies on the Western Front, the United States had declared war on Germany in April of 1917.  By the spring of 1918 as Will headed to Pachmari,  US soldiers and equipment had just begun to arrive on the western front, their eventual effect on the war as yet unclear.

The Russian peace, also had implications in Mesopotamia and most notably on the Persian Front.  Up to that time the British and the Russians had acted in a more or less coordinated fashion, the Russian Army having occupied the village of Khanaqin on the Persian Front (about 25 miles east and north of Kizil Robat on the Tehran Road) during the early part of the campaign period of 1917/18.  As the Norfolk Regiment moved toward Kizil Robat in the autumn of 1917 (see post 9#) and beyond, they made contact with their Russian allies.  During one of those times of contact, Will took a photograph of a Cossack Cavalry unit of the Russian Imperial Army.

With the Russians gone, the north-eastern end of the Persian Front near Urmia was being held by Assyrians and Armenians, fighting for their homes and their lives. They had depended heavily on the Russians for supply and support in their fight against the Turks, and once that was gone, they were soon overwhelmed.  The Assyrians and Armenians abandoned the fight and headed south, beginning an exodus with their families to Hamadan in southern Persia where they hoped the British Army would provide protection.  As the Assyrians and Armenians fled, The Turkish Third Army took possession of that part of the front, exposing the eastern flank of the Mesopotamian Expeditionary Force and threatening British aims to secure the Binagardy Oil fields near Baku on the Caspian Sea.

Will and Sgt. Woods arrived at Pachmari toward the end of May of 1918, duly executing the orders they were given to attend the School of Musketry.  They had made their way south, by steamboat and train, from Baqubah to Baghdad to Basra. At Basra they boarded a troop ship (Will’s 4th) that returned them to India, landing, some days later, at Bombay (Mumbai).

From the island on which Bombay sits, the 600 mile train trip to their destination took them up and away from the coastal plain and the beginning of the monsoons, through the northern end of the mountains known as the Western Ghats, and down onto the drier Deccan Plateau that stretches nearly 700 miles to the southern tip of the Indian peninsula. They crossed the plateau, and, rising as they met the foothills of the Satpura Mountains, the train deposited them either at Gadarwara or Mopani, both about 60 miles from Pachmari.  The last leg of the trip was probably made by horse and cart: a very good way to see the country.

The course was intensive, highly technical, and involved training with the latest weapons. Despite the school’s archaic name, muskets were not on the agenda.  The Lee-Enfield, bolt-action, repeating rifle was the infantryman’s primary weapon and had been  since 1895.  This was the era also of the automatic rifle, and of course the killing machine that was the water-cooled machine gun.

The British Army adopted the Lewis Automatic Rifle in 1914, adding considerable fire power to the infantry. Like the Lee-Enfield rifle, it used a .303 calibre bullet, but could fire at a rate of 500 rounds a minute. It is not clear how much, if any, training Will received with the Vickers water-cooled machine guns.  These automatic or, machine guns, were twice as heavy as a Lewis Automatic Rifle and required a three-man crew to carry and keep it functioning.  The benefit to the soldier and to overall strategy was their rate of fire (similar to the Lewis at about 500 rounds per minute) but more importantly, their effective firing range was around 2000 yards were the Lewis was about 800 yards. Armed with these weapons and a clear field of fire, very few teams of gunners with enough ammunition could keep an army at bay. That there were ever frontal assaults in this war is a hard thing to understand: that there were so many without alteration in the method of attack until later in the war seems a special kind of madness.

Will’s notes fill two hardbound 8 1/2″ by 14″ notebooks. The notebooks, contain lecture notes and diagrams covering: the care and use of various firearms;  ballistics; and, the techniques of range-finding.  The School was no “holiday” or rest stop,  this was serious work for men who were certain they would return to battle and were keenly interested in being as prepared as they could be.

Following the course, Will likely remained at Pachmari at least until August of 1918.  He seems to have taken fewer pictures during this time, and this may have been the result of being unable to buy film. Fortunately, on a days leave, he brought his camera along to photograph the wonders of  Jamuna Prapat or Bee Falls near Pachmari.(see photos on following pages)

(The following slide show of the waterfall  is 1 minute 30 seconds in length, and all the photos are available to view as separate images, in the galleries at right.)

In late August, Will left Pachmari for the garrison at Belgaum, the embarkation point for his return to Mesopotamia and the Persian Front.  He left India from Bombay and made the trip across the Arabian Sea, yet again, (this would be his fifth troop ship) to Basra, then to Baghdad, finally reporting for duty at the front in the village of Mirjana on September 13, 1918.  Will was immediately dispatched as the entry in the Regimental Diary attests,

“Lieutenant Grummett and 81 B.O.R.s (British other ranks) returned from leave.

Lieutenant Grummett to proceed to Khanaqin for duty in connection with refugees.

Will was back on the Persian Front. He was back among the now familiar dangers of weather and the enemy, but with a very different kind of assignment. The British command had decided that Assyrians and Armenians who had fled Urmia for Hamadan would be  brought to a secure camp at Baqubah near Bagdhad.  It would be the kind of work that soldiers would be increasingly required to undertake in the post war world: ensuring the survival of displaced people, and non-combatants, persecuted in times of conflict. For Will it would be two months of heartbreaking, difficult work that would open his eyes forever.  It would also become the wartime assignment of which he was most proud.

Next installment coming in October, Assignment: Armenian and Assyrian Refugees

View all posts by john snell 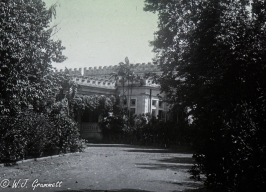 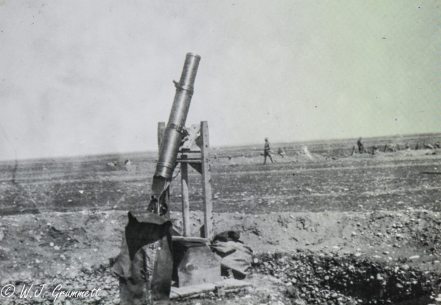 Ghurka Soldier of the 37 Infantry Brigade, with the Andrew Sisters, Persian front, Mesopotamia 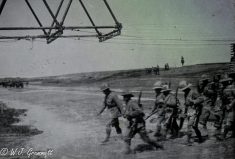 The Norfolk Regiment on the move, 1917/18, Persian Front, Mesopotamia 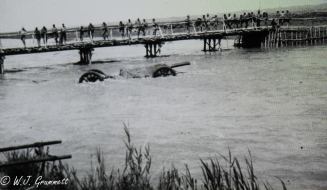 The School of Musketry, Pachamari, India, 1918

Pachmari and the School of Musketry, India, 1918 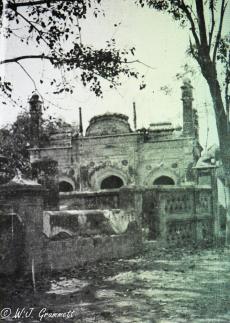 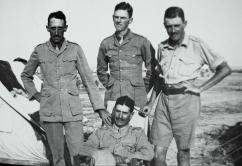 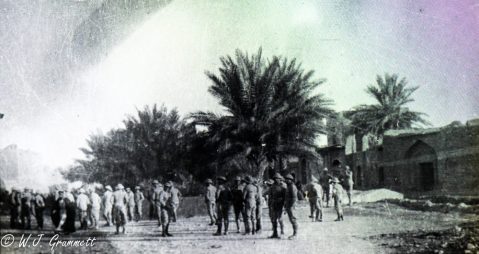 WJ Grummett and Sergeant Woods at the School of Musketry, Pachmari, India, 1918 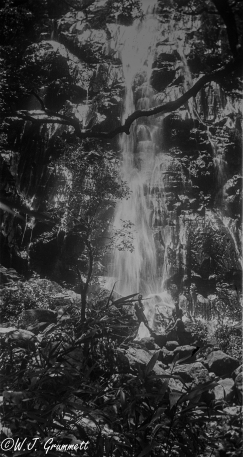 At the School of Musketry, Pachamari, India, 1918 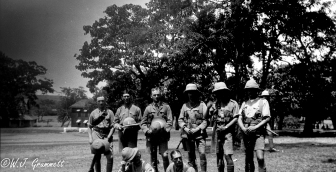 Refugees on route to the British refugee camp at Baqubah, Mesopotamia, 1918 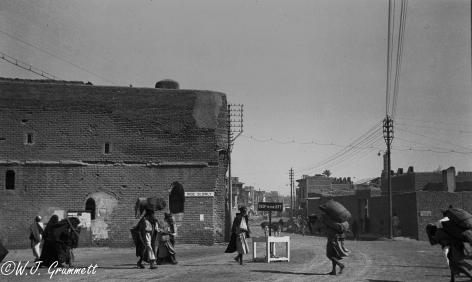 Camel train, refugees from Persia on their way to the Baqubah Camp, 1918 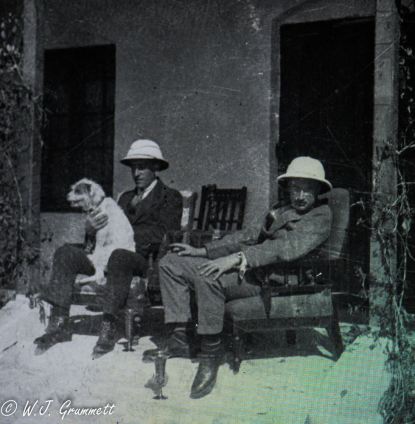 Baghdad from the Tigris River, Mesopotamia, 1917 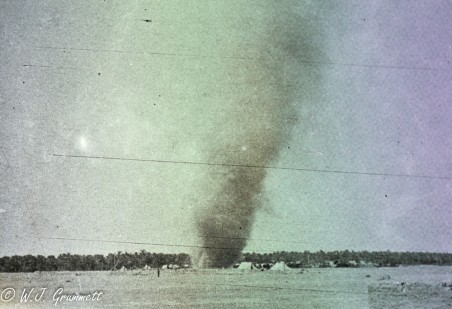 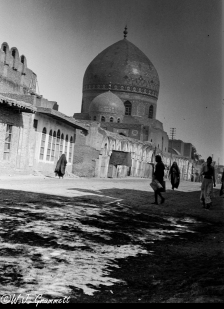 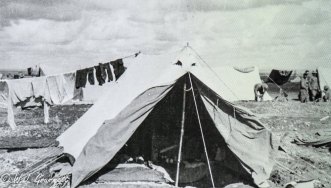 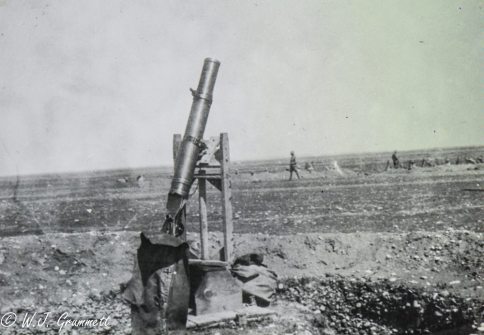 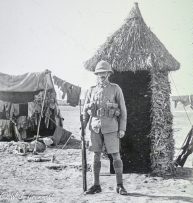 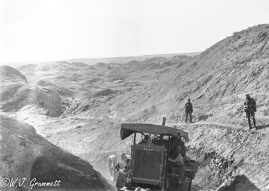 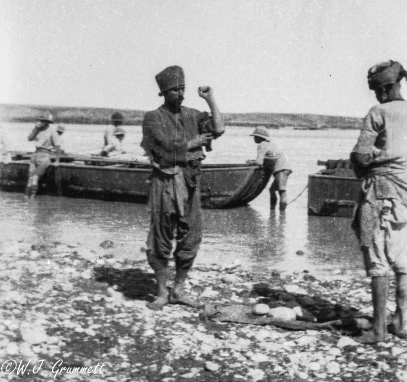 Temporary camp while moving the guns in pursuit of the enemy, Persian Front, Mesopotamia, 1917/18

A platoon of the Norfolk Regiment, WJ Grummett commading, 1917/18 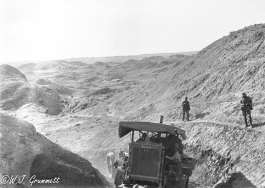 On the road to Baqubah, Mesopotamia, 1918

On the road to Baquba, Mesopotamia, 1918h

Refugees on the road to Baqubah 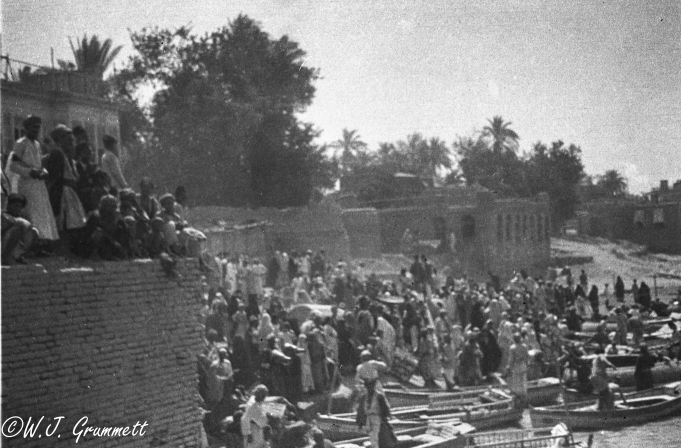